skip to main | skip to sidebar

This is all Copyrighted Material by Roger Gordy

To secure reproduction rights to any images or if you are interested in ordering prints please e-mail: rogermagnet@gmail.com
Copyright info
© 1960 - 2010 Roger Gordy - All Rights Reserved.
All photographs, text and html coding appearing in the Roger Gordy site are the exclusive intellectual property of Roger Gordy and are protected under United States and international copyright laws.
The intellectual property MAY NOT BE DOWNLOADED except by normal viewing process of the browser. The intellectual property may not be copied to another computer, transmitted , published, reproduced, stored, manipulated, projected, or altered in any way, including without limitation any digitalization or synthesizing of the images, alone or with any other material, by use of computer or other electronic means or any other method or means now or hereafter known, without the written permission of Roger Gordy of a fee or arrangement thereof. No images are within Public Domain. Use of any image as the basis for another photographic concept or illustration is a violation of copyright.

Welcome to the Roger Gordy Gallery

I hope you will enjoy exploring my life's work. I started photographing at age seven in 1960 and have never stopped. By clicking on each of the links listed below you will be taken to each of the galleries.

This is a work inprogress and will be constantly changing, so please return from time to time to see the evolution.

Please note that all of the images on all my blogspot sites are © copyright Roger Gordy and may not be downloaded or reproduced in any manner without a prior written request to do so and permission granted by me, Roger Gordy.
Contact me at: rogermagnet@gmail.com

The 2000 to the Present Gallery: http://rogergordy2000-present.blogspot.com/

Born in Phila., Pa. the oldest of three. Lived very briefly in Washington DC while my father was in the service. Then moved to Tonawanda, NY, just north of Buffalo in a small track-housing town of Green Acres (named way before the television show of the same name). In 1965 my father changed jobs and we moved to Newton, MA. Through junior high and high school I stepped up my portrait work photographing my friends and family. In eleventh grade I became the photo editor of the Newtonite, the Newton High School newspaper which was great fun and got me out of several classes when I had to photograph a special event, sports, the mayor, etc. I learned a lot about laying out a newspaper going to Somerville with the other editors where we had the type set on old Linotype machines by ex-Boston Herald typesetters who had set up their own shop. The two guys who ran the shop were usually happy to see us every other Friday in the late afternoon. They were usually already into several nips of rum by the time we got there and were quite jolly. We would order cold pizza from the store across the street and start in on the page layout. We would give the copy to the guys who would type out and cast in hot lead the lines of type. The columns of type would then be locked in a metal chase, inked and hand proofed on to paper page by page with blank spaces where the photos would be stripped in at the printing company who would print the actual newspaper.

I went on to study painting, film making, and photography at the Rhode Island School of Design, in Providence, RI graduating in 1976 with a BFA in Film. I had a great time there learning how films are made. I concentrated on cinematography. The best part about that school was the people, students and faculty, making friends in many different mediums. Getting to know the band the Talking Heads before they became the Talking Heads. Drinking beers at Magoverns , being cracked up laughing with the now late Charlie Rocket of Saturday Nite Live infamy and Dances with Wolves. A very naturally funny guy, a great loss.

The school was also good at bringing in guest lecturers. Two of my photographic influences, Walker Evans and Irving Penn spoke. Quite eye opening to see and hear these two men. Evans didn..t really speak, he was wheeled in, wouldn..t take any questions from the students, just kept asking when it would be over and when he would get paid. A very unpleasant old man. Penn while he did talk and take questions was a very difficult man to work with, which would explain why he had such a high assistant turn over rate.

After RISD I returned home to Newton and became involved with a family friend, Jim Bottomly who was a paper sculptor. I learned how to make puppets and props and would go with Jim to schools to teach his techniques of paper mache and cardboard sculpture. One year we got the contract to make all the items mentioned in the song, the Twelve Days of Christmas for the John Langstaff..s Christmas Revels, all out of silver paper and cardboard. This period of time was wonderful and fun making a two headed dragon for some storytellers; a jester..s stick with movable jaw so that it could talk, many, many puppets.

After a year of this, economic pressures arose and I got a job at Whitehall Games just down the hall from Jim..s studio, as a drill press operator. I drill the holes in small blocks of wood that were silk screened with a tic tac toe grid or a baseball diamond or other games that were played with dice and wooden pegs. I did this for a month or so till one day the shipping clerk went to lunch and never came back, so I was promoted to shipping. I had know the company owner Oz Freedgood from one of Jim..s workshops and he knew of my artistic talents and eventually made me the designer/cost estimator of new products. This was still in the days of T-squares and plastic triangles and rulers. Head lines and titles were done with a new product called PressType or rub on lettering. The body copy technology had also improved away from hot Linotype to the new computer controlled Compugraphic photofont system, which you still had to take the copy to shops that had such a system as the machines were very expensive and had a very steep learning curve. Apple Computer was just starting to form and by the time Whitehall Games was sold, design and typesetting had changed so that the designer could do the whole job on a Mac.

Seeing the whole process of design and printing change from Linotype in high school to computer gave me a great appreciation of how far the graphics world has progressed in my short lifetime. With such powerful programs such as Quarkexpress and Photoshop,ninty percent of everything that is printed in the world is done this way. I have done this type of work for the past twelve years. Designing mostly books (both the covers and the interiors): fiction, non-fiction, poetry, coffee table, self-help, and children..s. I..ve worked for David R. Godine, publisher, Brookline Books, The Cottage Press, Heritage House, Candlewick Press and various private individuals on freelance projects. If I was lucky I got to use my photographs in these projects, which is always a nice bonus.

Getting back to my first true love, photograph. My father always took photographs and had a darkroom in the basement. At the age of seven he let me use one of his cameras and taught me how to develop black and white film in the kitchen and to print the photos in his darkroom. I would say that my father's love of portraits has been my greatest influence on my style of photography. I try and make portraits that are for the most part un-posed and as candid as possible. I find that my best work occurs when just before I push the trigger, I momentarily fall in love with that person and capture what I see as the most beautiful aspect of the person. I see no purpose in making images that aren..t beautiful of people, except news photojournalism. I have done some news photojournalism for the Lincoln Journal in Lincoln, MA. Most of that work was fun photographing events but I found that I really didn..t have the stomach for "hard news", like multiple car accidents on Route 2. The subject matter and the feeding frenzy of the other photo and video journalist is not a pretty sight. So between the rawness and extremely low pay I haven..t done that type of work in many years.

Last year I finally bought a digital SLR and now enjoy the freedom from chemicals, wasted film on bad shots and the ultimate joy of playing with my images in Photoshop. While still enjoy making a "straight" un-manipulated photo I like that I can treat the image more like a painting with the ability to add or subtract from the image and make it even more of my vision.
3 comments 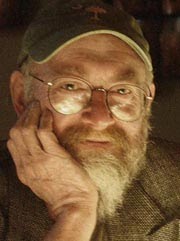 Roger Gordy
Born in Phila., Pa. Then Tonawanda, NY, north of Buffalo. In 1965 moved to Newton, MA. Jr high & high school I did portrait work photographing my friends & family. 11th grade became photo editor of Newton High School paper. I learned about laying out a newspaper. Studied painting, film, and photography at Rhode Island School of Design, Providence, RI graduating in 1976, BFA in Film. After RISD returned to Newton & working with Jim Bottomly, paper sculptor. Made puppets & props. Went with Jim to schools to teach paper mache and cardboard sculpture. After a year, I got a job at Whitehall Games, as a drill press operator. I was promoted to shipping. Later became designer/cost estimator of new products. This was still in the days of T-squares and plastic triangles and rulers. Taught myself Quark and Photoshop. For 12 years, designing mostly books: fiction, non-fiction, poetry, and children’s. Worked for David R. Godine, publisher, Brookline Books, The Cottage Press, Candlewick Press & various freelance projects. 2005 I bought a digital SLR. I have been photographing people for 48 years, it is my greatest passion.